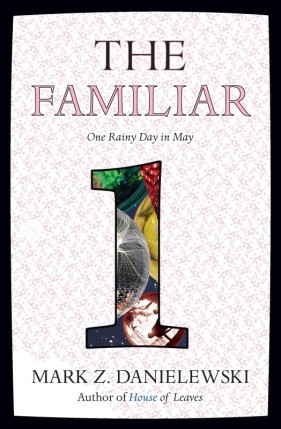 If Mark Z. Danielewski is known for one thing and one thing only, it’s that he isn’t afraid to put his readers to work. With House of Leaves, my mind reeled as I held the book sideways and upside down and flipped back and forth from footnote to footnote. And if that book taught me anything about Danielewski’s writing, it’s that the payoff will be worth it.

And so I tore into The Familiar, Vol. 1: One Rainy Day in May—the first of a proposed 27-volume series—like a child on Christmas morning, devouring almost 900 pages in just a couple of weeks. Granted, it’s the fastest 880 pages you’ve ever read thanks to Danielewski’s love of inventive page layouts, spacing, and fonts. But trust me when I say that this book puts you to work. 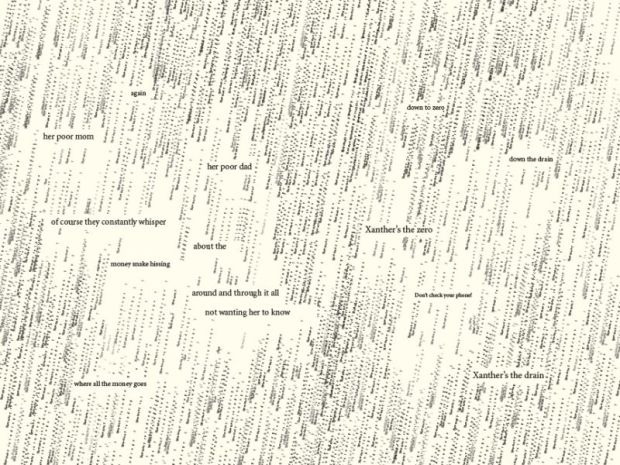 Inside its pages you’ll find the story of nine intersecting lives that span generations and languages and take place around the world from LA’s Echo Park to a high-rise in Singapore. At its heart, though, is the story of a little girl named Xanther who heads out one rainy May morning to get a dog. What a terrifyingly simple premise to kick off the thousands of pages to come.

And One Rainy Day in May—like Mrs. Dalloway and Ulysses before it—covers just that: a single rainy day in May.

Aside from Xanther, we hear the voices of jingjing, a drug addict in Singapore; Luther, an LA gangbanger; Anwar and Astair, Xanther’s parents; Cas, a computer scientist in Texas; and Isandòrno, whose chapters I couldn’t understand at all (Wikipedia tells me he’s an existentialist in Mexico, which I personally think is about as good an explanation as none at all).

It’s unfair to expect the connections between these characters to be obvious this early on—after all, there are 26 volumes to go with this tale. So I did my best to cut the book some slack there. Sometimes I could see the threads, however thin, that were tying things together, but when I couldn’t I resolved not to focus on it and to simply plow forward.

That seemed to be my motto during this book: forward, ever forward. At first, I’d get hung up on the details, pushing myself to make sense of them and often trying in vain to understand whatever I felt I was missing. But then I remembered that I wasn’t reading this to punish myself.

No one was going to quiz me at the end of the day. No one would mock me for my imperfect understanding. No one would hate me for finding it difficult or, dare I say, unenjoyable at times.

So I moved forward.

I picked up whatever crumbs I could along the way and arrived at the end with a sense of accomplishment.

Ultimately—and I’m hesitant to admit it—I think I’m a bit disappointed with Vol. 1. I had such high hopes, but I found so much of this volume inscrutable. The first time I met jingjing, I had to scour the internet for some kind of summary because I just couldn’t make sense of what was happening or even who was talking. An excerpt will help illuminate my struggles:

“they saysay she tutor demons, lah. saysay mice dance to her finger snap and a pelesit :.Animistic spirit frequently aligned with Polong.: does her bidding. saysay sa-rukup rang bumi :. World Coverer .: fly to her window and call her mother. they saysay a lot.”

In rereading a portion of that chapter just now, I’m delighted to discover that I found it infinitely easier to parse out. But I’m not here to theorize on the potential benefits of rereading. I’m here to talk simply about what I’ve read.

And I just couldn’t wrap my head around this book enough to see the meaningful connections I know Danielewski wanted me to find. A second pass appears to be mandatory for me if I’m to truly get everything I can out of this and I’m unsure how I feel about that.

I don’t mind putting the work into reading a book that I feel deserves it, but I’ve never encountered one that seemed to ask quite so much of me. At the same time, I don’t think it’s fair to consider that a fault or a flaw.

Still, I am far from all sour grapes and disappointment. On the contrary, I couldn’t be looking forward to reading Volume 2 more. I know I’ve only just entered a labyrinth and that it’s here that it feels the most daunting. But I’m willing to let Danielewski lead me deeper because right now? I still trust that what I’ll find at the end will be well worth it.