My baby loves me, I’m so angry
Anger makes me a modern girl
Took my money, I couldn’t buy nothin’
I’m sick of this brave new world 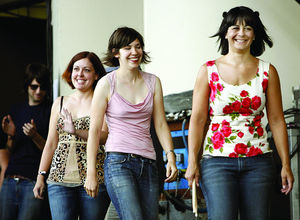 I was 18 and driving back to the ‘burbs when I first pressed play on a Sleater-Kinney album. It was 2005 and The Woods had just been released. I remember the screech and howl of the first track “The Fox” and how it was like nothing I’d ever heard before. I’d never listened to music like this, I didn’t know how to approach it. I knew I felt something, but I didn’t know if I liked it. I skipped ahead and I heard “Modern Girl” and that was that. I was hooked.

When they reunited with a surprise album last year, I bought tickets to their Chicago show the same minute they went on sale. It was one of the best concerts of my entire life. Their presence lit the stage on fire. 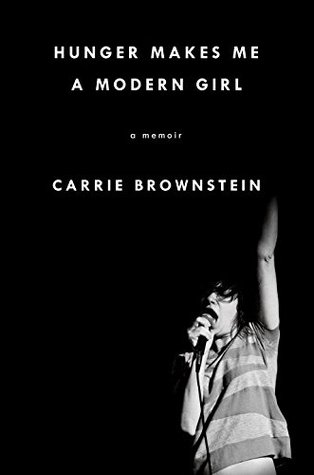 All of this goes to say that I am more or less the ideal audience for Carrie Brownstein’s memoir, Hunger Makes Me a Modern Girl.

I’ve never read a celebrity memoir (it’s been almost five years and I still haven’t finished Bossypants). I felt it smart to temper my expectations, as impossible as that seemed to be. But from the opening sentence, Brownstein smashes your expectations:

“I only wanted one thing on tour: to slam my hand in a door and break my fingers.”

By the end of the prologue, you already know what’s coming:

“Sleater-Kinney was my family, the longest relationship I had ever been in; it held my secrets, my bones, it was in my veins . . . And I was about to destroy Sleater-Kinney.”

Just like “Modern Girl,” by the time I read this far, that was that.
Hooked.

If you only know Brownstein from her work on Portlandia, I’m not sure I think this book is for you. Its slim 241 pages take you from her youth in the suburbs of Seattle to the college music scene in Olympia and through the rise, fall, and resurgence of Sleater-Kinney with nary a mention of Fred Armisen in sight.

And as much as this is Carrie Brownstein’s memoir, it’s also the story of the band and the music. I would never tell someone not to read it. I think I’m just having a hard time imagining how reading a detailed description the way “Dig Me Out” was written could mean very much without knowing what it sounds like. Though that might just be the fangirl in me talking.

Reading Hunger made me feel closer to an artist responsible for creating some of the most important music of my life. When she describes growing up, it was so easy to see myself in her:

“I resented parts of myself that were late to adopt coolness, late to learn—I wanted to have always possessed a savviness and sophistication, even though I clearly had neither.”

The desire to belong and to create and the frustration of trying to craft an image of yourself that actually feels like you all resonated deeply with me. The inside look at the Riot Grrl scene (a scene I always believed would have suited me wonderfully) was a peek behind the curtain that left me feeling thankful for and reinvigorated by all these amazing, smart, angry women.

I could keep going on, but I think it’s pretty clear that Hunger Makes Me a Modern Girl was a slam dunk for me. It’s a must-read for every Sleater-Kinney fan and wannabe Riot Grrl. I don’t know if it’ll resonate anywhere near as strongly for those new to SK, casual fans of Portlandia, or general music-memoir readers, but thanks to Brownstein’s clear, thoughtful writing, I think it’ll still be worth their while.